You can play powerful Masterminds and equip your theme park staff to perform Comicbook style capers. Unite to battle and survive against gigantic Kaiju who stomp their way through the game and your theme parks as you fire off missiles to ward them off and score points. Have your Hacker squad infiltrate your rival’s wi-fi systems to leech their money into your accounts. Or relax by your new Ocean features and watch your sea lions, penguins, dolphins, and manta rays bring in the crowds... and their cash.

Visit the Unfair CHKO expansion Kickstarter notification page to get your reminder for the Feb 7 launch.

We are thrilled to expand the incredible and unique world of theme park tableau and engine building Unfair offers. In Unfair you make each game session unique from a subset of the theme packs available, by player choice or by randomisation, 1 per player. Each theme pack offers different cards, events, goals and mechanisms you mix and master in your efforts to build the best theme park in town. 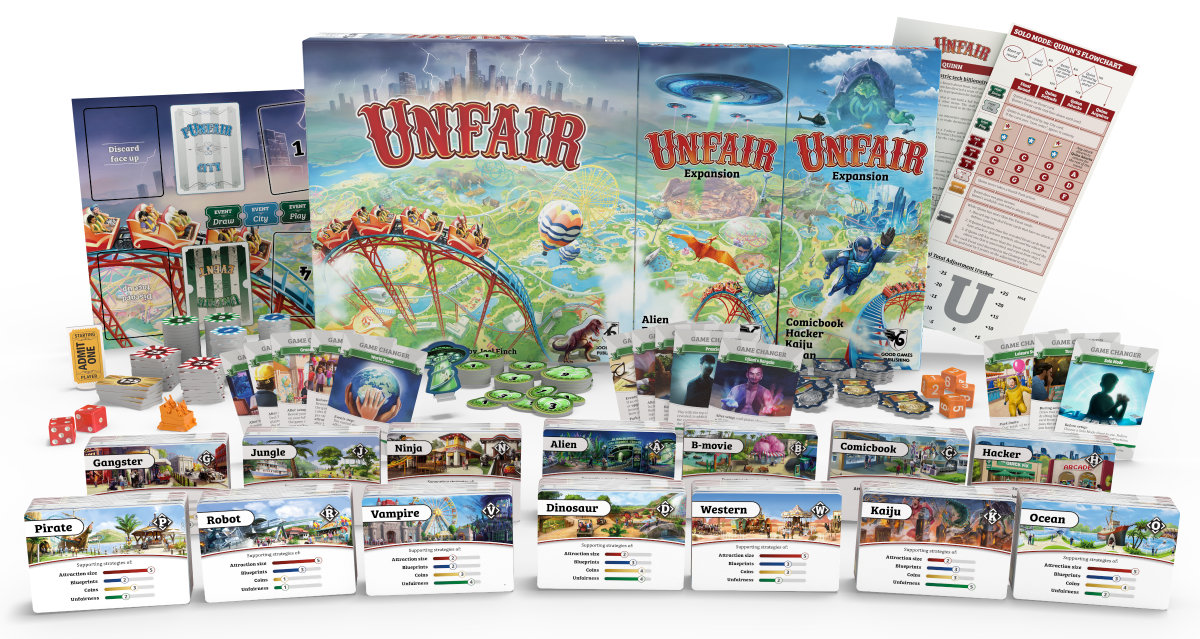 Unfair drips with loving cynicism about the ruthless business world behind theme parks’ shiny fun veneers. It allows players to build powerful game engines with huge card combos, and find occasional ways to mess with rivals’ engines or defend your park against such efforts... if doing so is better than boosting your own park with the top halves of the same cards. It all comes with a wink and a nod; its cards feature behind-the-curtain puns and wonderful art filled with easter eggs for players to hunt.

But that’s just a wonderful backdrop to the incredibly varied combinational engine building goal chasing gameplay that keeps mid-weight gamers coming back for repeated plays. With some players logging hundreds of plays. Unfair plays 2 - 5 players, but the Unfair scoring web-app also confirms its enduring popularity with couples has increased during the pandemic, with 2 player games making up over 50% of score tracked games in recent times. It’s no surprise with 2 player games taking under an hour and being so different each time.

Going up to 14 theme packs in this expansion offers 91 variant 2 player games to play! And that’s before you use any of its now 13 official game changer cards to shape the game further to your tastes, eg by making shorter & easier games, preventing attacks altogether, seeing events ahead of time, starting with powerful showcase cards pre-built, beginning with a card draft for more control, or adding another theme pack for even more thematic engine combo possibilities!

Due to growing demand, the first of several Unfair solo modes will be released with the Unfair Comicbook, Hacker, Kaiju and Ocean expansion.

Unfair is a challenging game to begin with, as the game first helps, then later challenges you with its helpful Funfair & harmful Unfair city events. Then both you and and your out-of-control theme park hoarding solo rival AI Quinn can use events to attack each other or defend against attacks with points to be gained or lost as you do so. This makes for an interesting puzzle against which to build a theme park good enough to beat Quinn’s changing score.

And again, Unfair’s modular replayability offers a fantastically flexible, replayable and valuable framework for solo play. In solo games of Unfair you play with any pair of the now 14 theme packs, to create a very different game each time, with unique mechanisms and cards and a range of new strategy combos to try. That offers an incredible 91 variant games in Unfair’s first solo play mode.

And with 3 more Unfair expansions and 12 theme packs yet to come, and more solo modes to use them in in the future, things will only get bigger.

This Unfair expansion crowdfunding campaign will allow fans to access some very cool extra bling to amp up their experience:

Unfair is the game you want it to be.