The Unfair universe of strategic theme park building fun is set to expand with the launch of the first expansion to the game on Kickstarter on July 23, 2018.

The pressure from fans of Unfair for more themes has been intense. So we are excited to be adding 4 new themes to the 6 core themes released with Unfair in 2017. With a total of 10 modular themes to play with you will enjoy even more variation and replayability as you explore new ways to make the best theme park in the city. The extra theme packs in this expansion raise the number of thematic combinations for a 4 player game from 15 to over 200.

Each Unfair theme pack brings its own unique attractions, upgrades, staff and events and core mechanisms along with some core cards for consistency. Every game brings a different array of strategies, combos and problems to find and solve with its chosen themes. Not to mention signature art, flavour and easter eggs.

The Alien theme adds advanced technology our new overlords may provide... to those with enough of the new alien influence currency. Will you join the global suck up or step up to join the resistance? 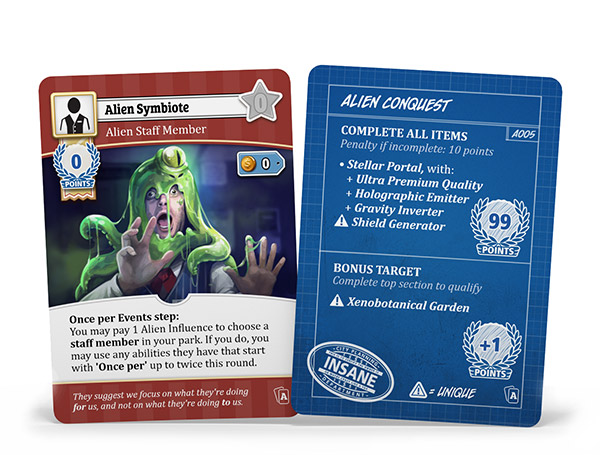 B-movies allows theme park moguls to mash up themes as they rush out panovision movie masterpieces so awful they are awesome. This theme unlocks panorama scoring for each and every theme pack.

The Dinosaur theme pack brings 2 powerful showcase gate cards and giant reptiles from a long lost valley into enclosures built into your attractions. Just think how fast the turnstyles will spin! What could possibly go wrong?

Western opens the game out with space for 6 attractions, including 2 Super Attractions running at the same time. Think of the power combos! And the gold. And the shootouts.

This expansion also brings 4 new game changers so you can tune each and every game to your groups' preffered style of play. Do you need insurance in case something goes awry? Or do you want a glimpse of what trouble looms in the second half of the game to better plan for it?

Unfair was designed to offer highly replayable & challenging strategic fun and was one of board game geek's most play logged thematic games of 2017. Its fantastic modular replayability allows players to explore an ever shifting range of combos and strategies as they overcome challenges to build the best theme park in the city. These 4 new themes have been in development for years. With the help of hundreds of fantastic playtesters, we aim to build on Unfair's modular replayability every year, creating an epic line of theme park building fun.

Look out for the Unfair Expansion Kickstarter on July 23, 2018.