Yes we have 2 theme park building games: Funfair and Unfair.

Unfair was released in 2017 and is a modular mid weight theme park building game currently being expanded to give infinitely replayable fun. It’s a lovingly cynical interactive engine building game system that gives players a huge variety of engine boosting and combinational elements to explore game to game. It also gives players the ability to mess with each other in limited ways, if they think they need to. This is unusual in mid weight engine builders... but it means engine built victory is rarely certain half way through the game.

Funfair is our new standalone theme park building game. It introduces players to the infinite world of theme park building they can find in Unfair and its many modular expansions. It’s built from the same DNA and uses many of the core gameplay elements and rules found in Unfair. They are set in the same universe and share their look and feel, but have some important differences summarized in the attached table. But, in a nutshell, Funfair is a shorter, tighter, faster and friendlier version of Unfair.

So how do they differ? 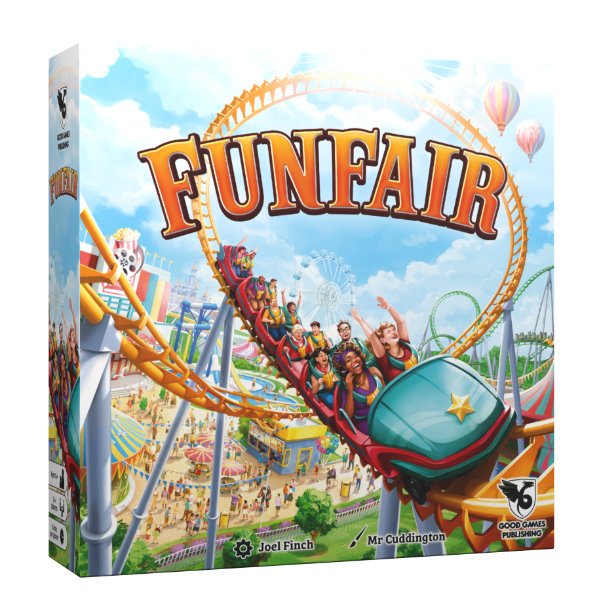 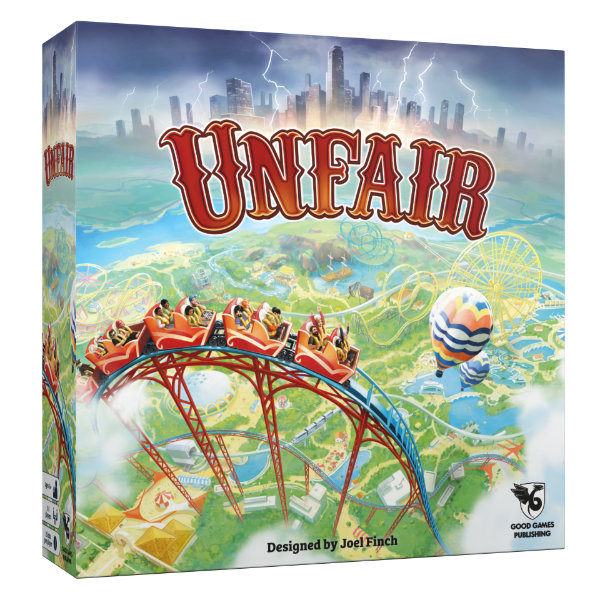 2 - 5 players, 25 mins per player. A big interactive combolicious engine builder with the potential to mess with your rivals if necessary. Modular theme packs for huge replayability.

Funfair is simpler, faster, tighter and friendlier than Unfair. In the Funfair box is a fixed set of 147 cards, compared to 6 modular theme packs totalling a potential pool of 347 cards in Unfair, not to mention its 5 planned expansions adding 20 more theme packs and hundreds of new cards to the Unfair cardpool. So Funfair has faster setup and packdown time, streamlined rules and mechanisms, fewer different cards for players to understand, and no player events to boost your park... or hinder your rivals.

Funfair has less than the practically infinite replayability Unfair’s modular theme pack structure enables, but still has plenty of replay value and contains various strategies to explore over many games.

Funfair tweaks some cards from Unfair to suit its shorter game arc, and adds new ones, including new Staff Members, Showcase cards, Blueprints and 5 new public Awards for players to chase. Unfair fans may see some of these new cards in future Unfair expansions in some form, but not all of them.

Funfair is a tight race to build the best theme park in 6 turns and an average 21 actions. It plays fast and tight while it helps the players with positive city events every turn. Players optimise their plays around that help with various card combos and efficiencies as they build their theme parks. Doing this well is the key to mastery in Funfair. It has been designed to be more forgiving than Unfair for newer or lighter gamers, whilst still providing experienced gamers and Unfair fans plenty of nuance, combos and goals to strategize around.

Unfair is a bigger and more variable 8 turn game with about 40 actions per player between 24 standard actions, event card plays, and triggering special abilities. You can assemble a wide variety of powerful engines and card play combos in Unfair. Due to the game helping you for the first 4 rounds, and hindering you for the last 4, players need to stay agile and adapt to each game’s changing gamestate, taking opportunities to combo here, and mitigating disaster there. All this variability is a part of why fans consider it so replayable and fun to explore. 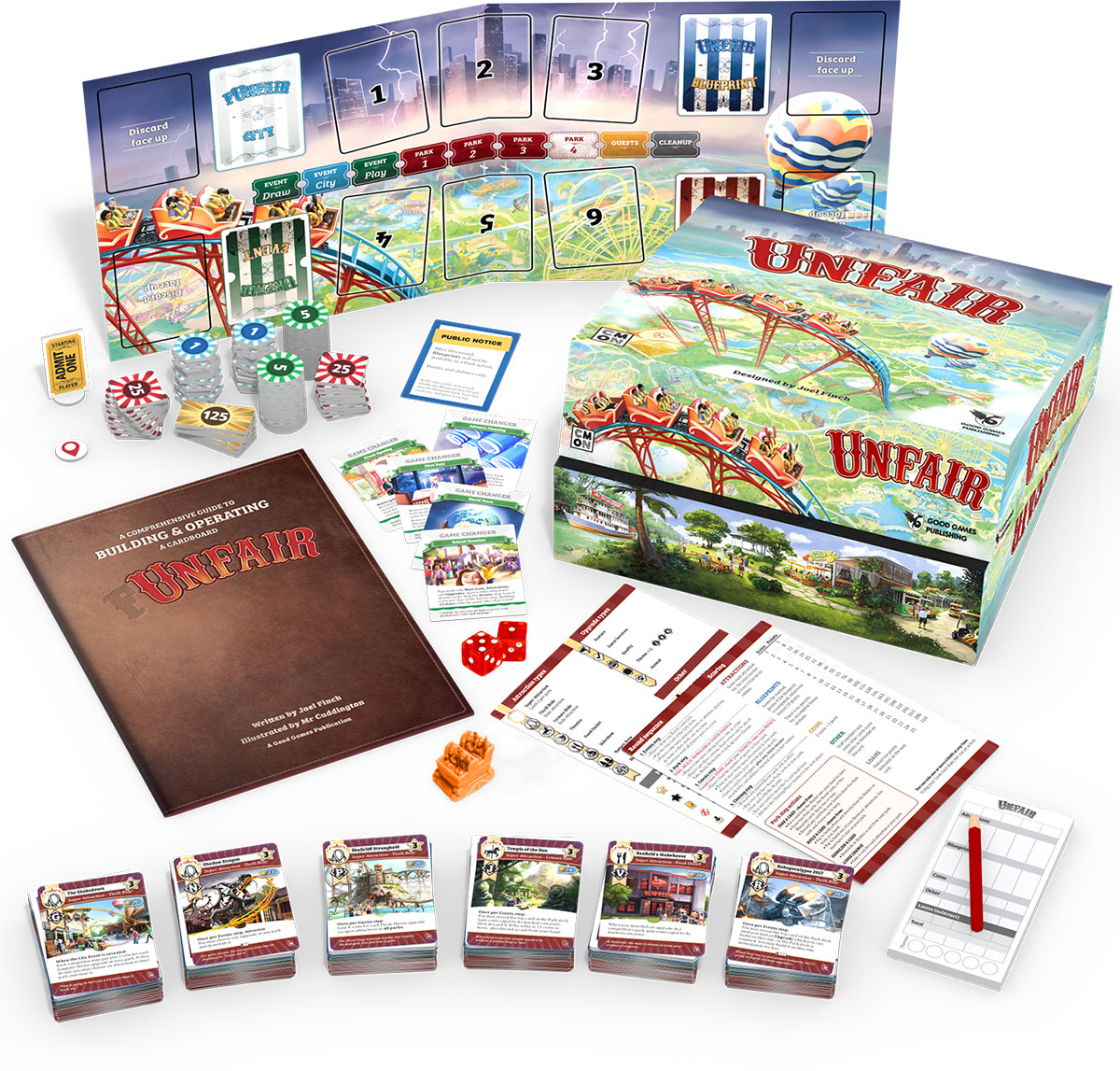 Player interaction in Unfair and Funfair

Because it's a big engine building game, Unfair has a few opportunity-costed ways for players to disrupt their rival’s parks to reign in their engines a touch. So games are never decided half way through because someone has an unstoppable engine. With its either / or double ended event cards, you decide whether the best play is to boost your own park unstoppably, or hinder a leading rival, with a risk of it being blocked or mitigated.

Large interactive engine building games are rare. Unfair unashamedly says what it is from its title on, and many fans love it for the deep strategic choices it asks players to make, including whether it is better to mess with a leader or boost yourself unstoppably.

Unfair is a lovingly cynical take on the ruthless world of theme park moguls who will do whatever it takes to build the best theme park in town. Its laced with easter eggs and flavour text and wonderfully thematic cards and abilities that riff of geek and theme park zeitgeist. But it's not for everyone. Some people see roller coasters and see right past the ruthless money extraction machines we signal theme parks really are through its name and the lightning bolts on the box, and find themselves having to make a wide range of deep tactical and strategic choices in a game that will challenge them.

If they would rather have a quick fast ride of a game with few risks, Funfair gives them that experience.

At about half the time length and action count Funfair simply doesn’t need more than the positive player interaction it has. Some gamers don’t care for negative player actions, prefering to simply race their theme park build against their rivals’ parks. Many folks play and enjoy Unfair that way with its World Peace game changer. But Funfair is purpose built for a tighter experience in that style of play, with no way to mess with your competitors. It has some positive player interaction and opportunities for selection denial, but it's all so tight you want every action to count in a positive way for your own park.

Do they work together?

You can't mix Funfair and Unfair together. They have different graphic design and some card abilities are tweaked or costed differently given the different games they sit in.

However, Funfair makes a fast and friendly introduction to the world of theme park building explored in depth in Unfair. Players who enjoy Funfair but want more will be able to ease into Unfair faster and open up a practically infinite world of strategically varied theme park building to last years to come - with modular expansions providing 26 classic theme park themes eventually, and some big surprises over time.

If you are one of our many Unfair fans already, you may not need Funfair, but playtesting proved that many Unfair fans enjoy the quick build efficientcy and combo race Funfair offers. It feels like a tight Unfair expansion.

You may also find it helps introduce new players to Unfair’s more expansive and infinite theme park building fun, and on a more level playing field. Or you may just find it’s perfect for when you have more limited time or your fellow gamers want a lighter game. Either way, it has been designed to appeal to you too!

So which one should you get?

If you and your group like your games fast to set up and pack down, to play in 30 - 60 minutes for 2 to 4 players, with only positive player interaction in a tight tableau & engine building race, Funfair is a great fit for you and your group.

If your game group likes longer interactive engine / tableau building games for 2 - 5 players with a huge range of combinational possibilities and strategies, the ability to mess with your competitors if needed, the ability to tune each game to your group’s mood, and practically infinite replayability, then Unfair is likely your thing.

Both games are great for group or couples play, but Funfair is a little more family and new gamer friendly. However, experienced gamers still revel in its tight combinational gameplay and fast play time. It has that ‘1 more game!’ feel.

Unfair has however proven very popular with gaming couples due to its theme and wildly replayable modular gameplay and many game changers that allow you to officially change the rules of play. It's a game fans have reported playing hundreds of times.

Funfair won't have a solo mode, but we are developing a solo mode in the next Unfair expansion.

So we think we have theme park game fans covered either way. Take your pick… or in some cases - why not both?