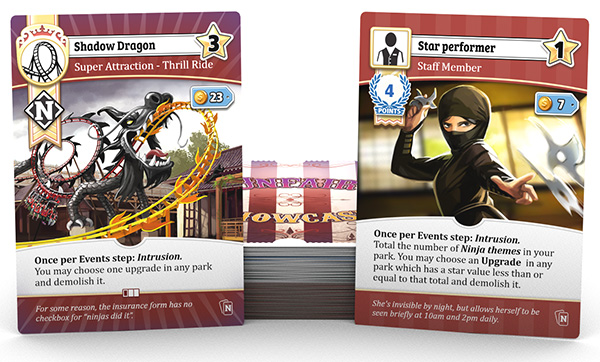 In the Unfair Kickstarter campaign we are offering 2 full extra theme packs as stretch goals. Thats +50% content at no extra cost. Now that's generous, but hardly original. Some projects do this and offer those expansions as additional sale items in retail. Like some other projects, we take a long view through retail, and will make those expansions part of the core game. We think thats a win win for backers, who get +50% bonus content for their support, and for those who buy the game in retail without having to pay extra. Both gamers are important to us.

We are close to reaching our first stretch goal of a complete Ninja theme pack of 56 cards. It adds a 5th player mode and awesome sneaky mayhem. We have 1 more mysterious theme pack fully developed and its art will be complete by the project's completion. That will add more variety to the game so players can play with 2 to 5 theme packs from 6 available.

We also want to show everyone some of the cool stuff we have coming up and say thank you to our backers. So we are including some teaser cards from future expansions too. Hopefully up to 12 of them. The cards are great fun and work independent of their wider theme packs, whilst clueing backers into how they might work. They will make the kickstarter version of Unfair different to the retail version until all their expansions come out.

We look forward to seeing how backers enjoy these as they are unveiled in the Unfair Kickstarter campaign.